Continuing my earlier post about my Yaesu FT-7800R install, I completed the radio portion this weekend, so now I can get on the air.

I had a Diamond NR770HNMO antenna, and bought a fender bracket mount for my F150. All I needed was an NMO mount and to fish the coax line to the radio.

A local ham friend had an NMO mount and a connector, so on Saturday I went to his house to complete the install.

After some doing, we got the coax through the firewall, then we ran it all the way to the back of the cab, where the radio was mounted. We crimped on a connector, then discovered that the cable was too short. By an inch.

We noticed that we ran the cable in and out of a bracket in the front footwell, so I removed one of the bracket's mounting screws and pushed the cable around the bracket. That gave us just enough cable length to reach the radio without relocating the radio. Crisis averted.

Then we turned it on, and we discovered that its sensitivity wasn't up to par.

In the end, my friend gave me a loaner Kenwood 2m radio so I would at least be able to get on the air.

When I got home, I did some experimenting with another local ham, and I found that yes, the Kenwood is definitely a little bit more sensitive, but the Yaesu seems to be working fine at my house. I'll use the FT-7800R for a couple weeks, then decide whether to keep or replace it. If I replace it, another radio should be very easy to install.

The only necessary remaining piece for this install is to build or buy a mount for the faceplate. I'm thinking of building a wooden something that mounts to the front seat bolts and holds the faceplate in front of the center console.

In addition to that, I still want to hide the controller and speaker cables under the carpet.

Anyway, now on to the pics of what was completed this weekend.

First, the mounted antenna. It's a little tight getting the coax through the crack between the fender and the hood, but it seems to be okay. 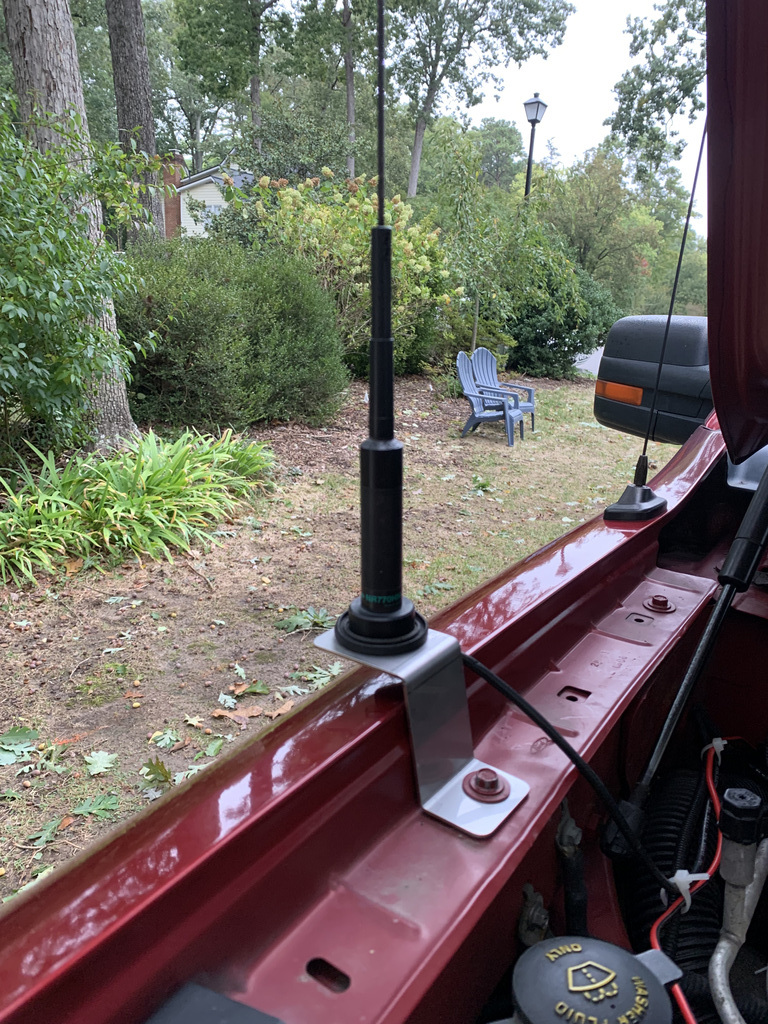 The antenna wiring heading toward the firewall: 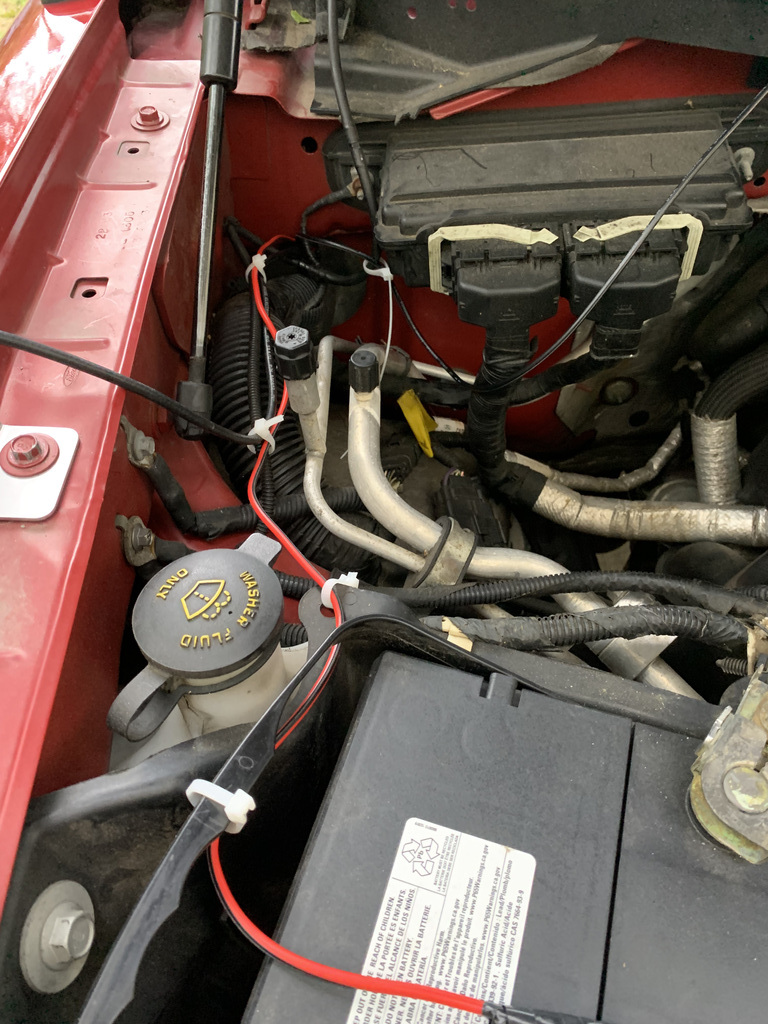 The wires going through the firewall: 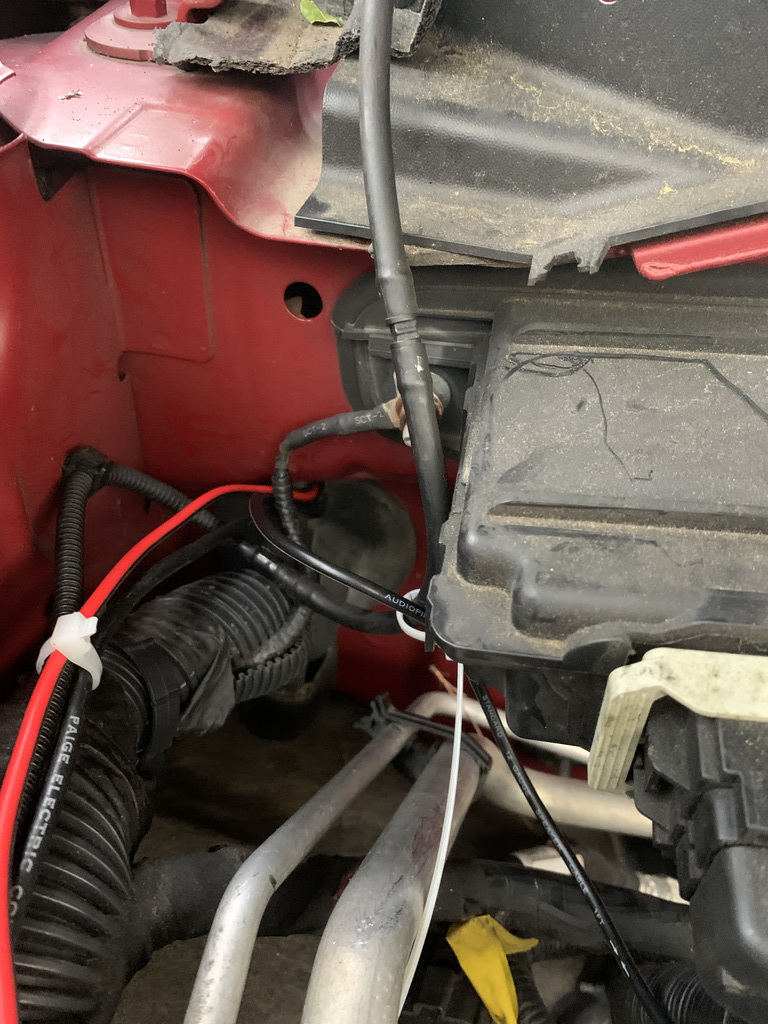 The radio in the back of the cab: 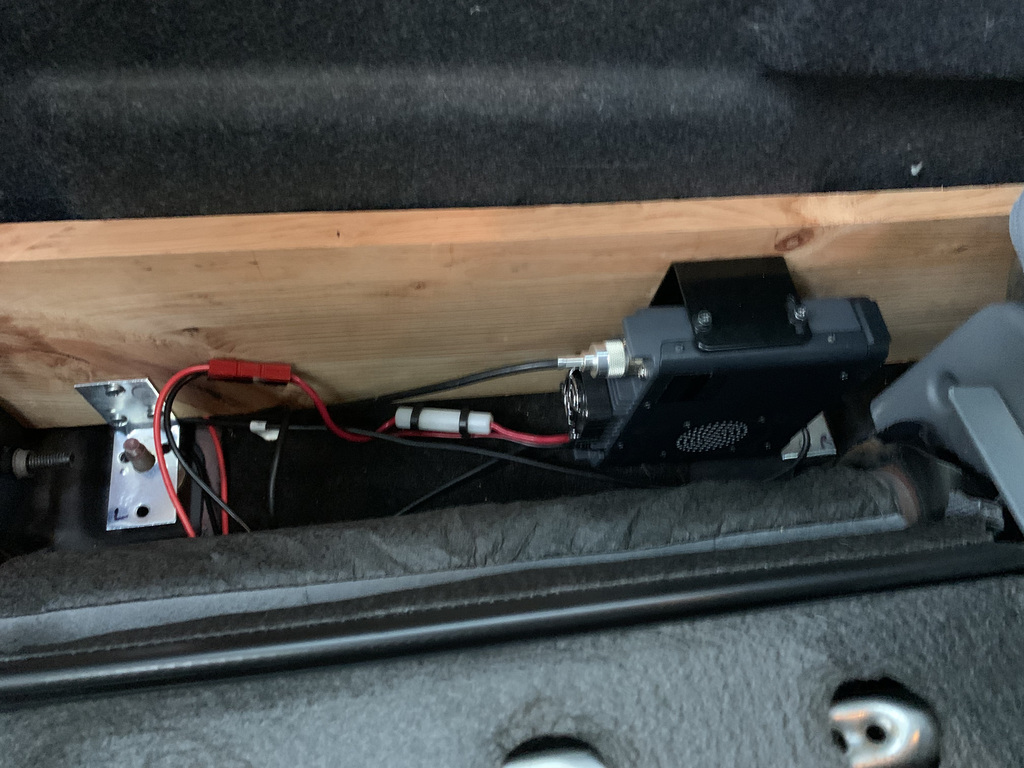 The remote face plate in the front: 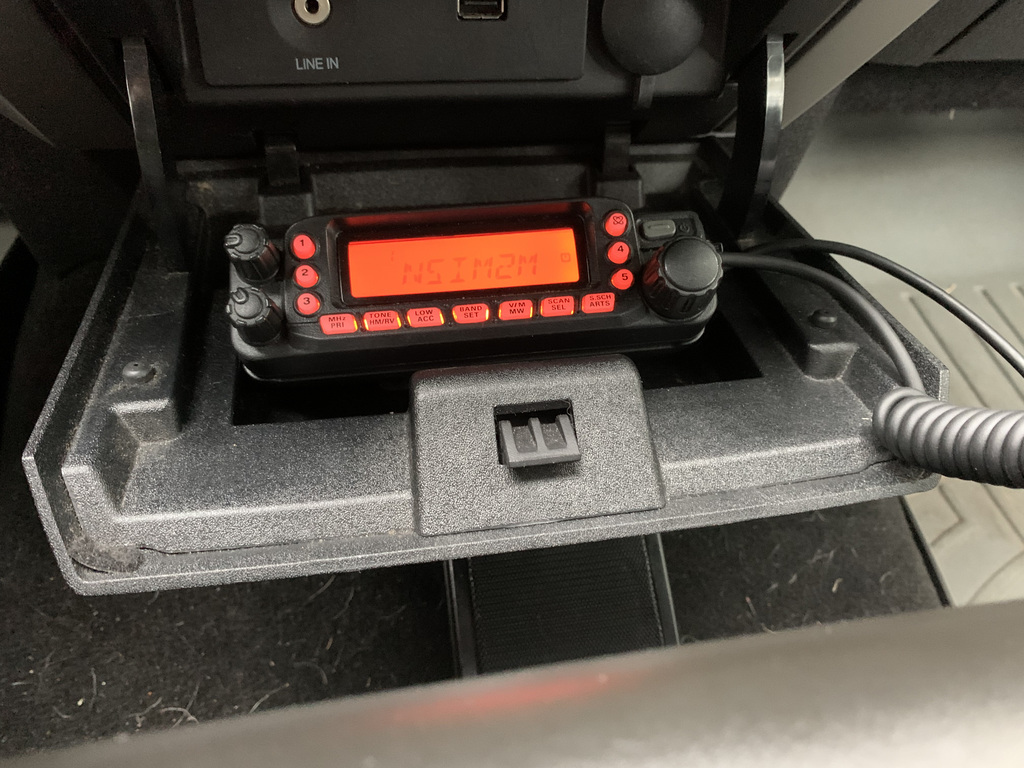 The remote face plate and mike in the front: 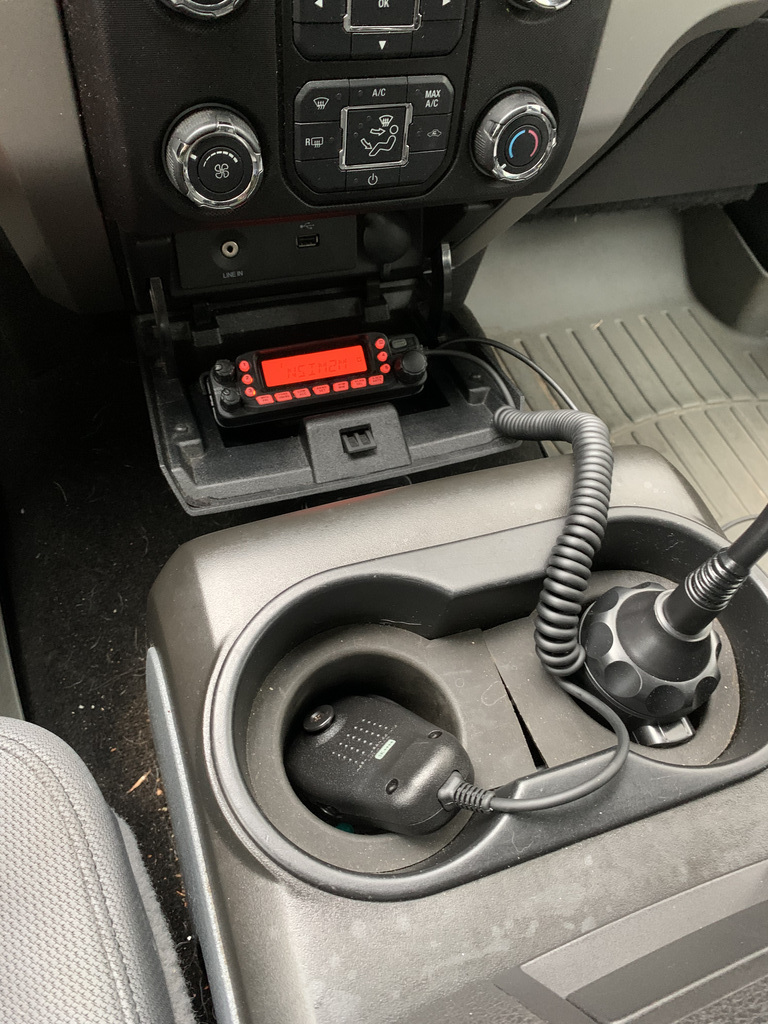 Update: A friend pointed out that I missed a couple obvious photos here, and I was also asked about how tight the fit is between the hood and the fender.

First, a pic showing the antenna (it is difficult to photo since it's so thin).

Now a couple pictures of the mount, including a closeup: 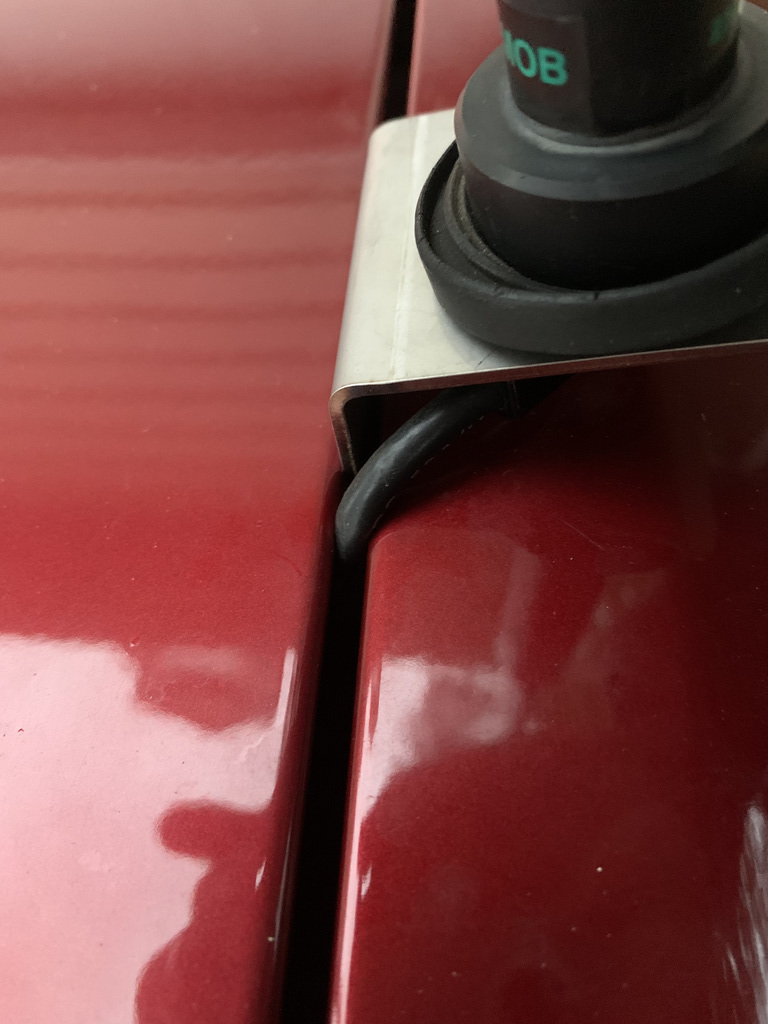 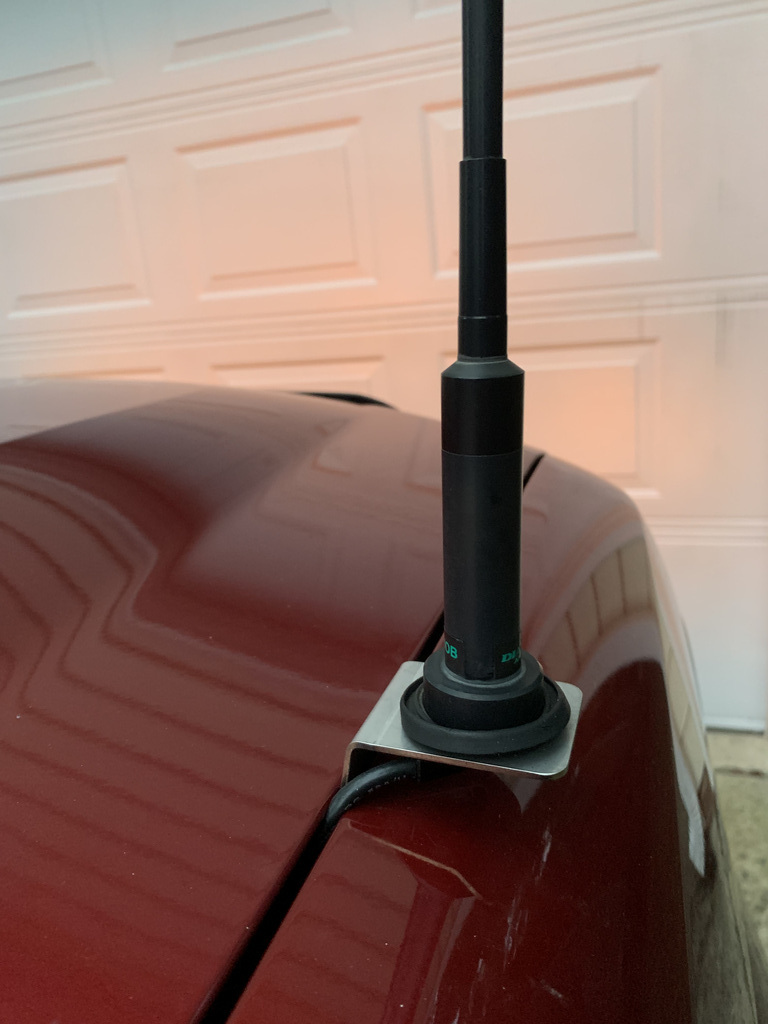 Finally a profile picture of the truck: 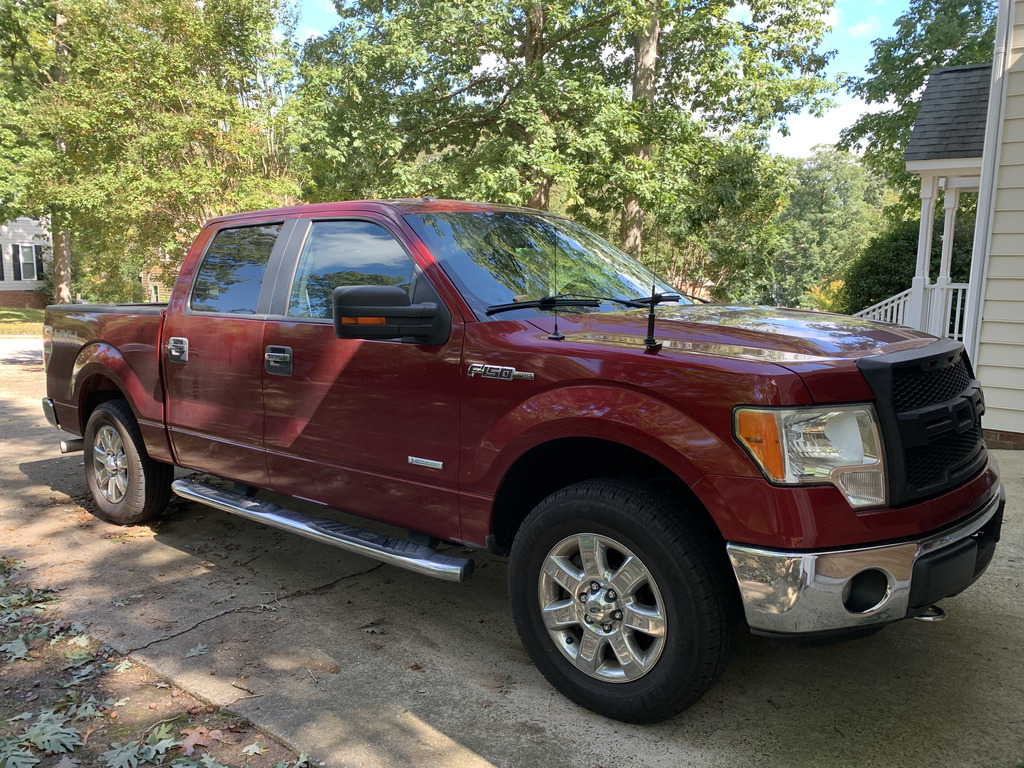